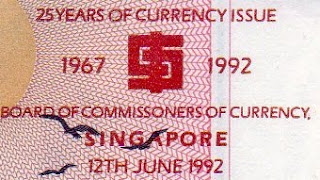 As the English Language is the lingua franca of Singapore and the printer being a world class British company, such spelling error is almost improbable!
Thanks be to them, that if you had bought the book back then, the asking price in 2010 is about eight times it's original selling price and still going up!
Posted by Clement at 1:06 PM 2 comments: 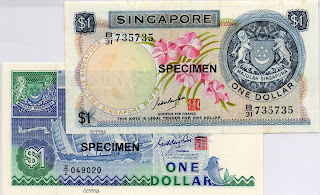 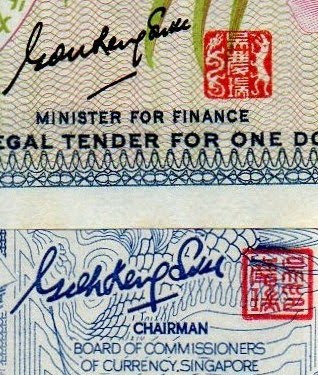 Can you spot the number of distinct differences between the two signatures and the Red Seals.

Two different printers were engaged to print the banknotes, could this be the cause?
Posted by Clement at 8:46 PM No comments: 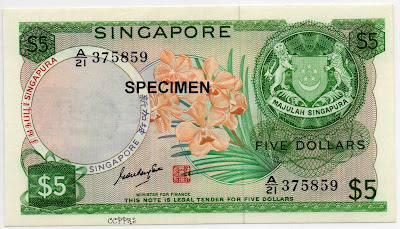 According to the local newspaper article printed by The Straits Times in it's 8 July 1988 publication, Quote" You are in the money" Unquote. It goes to mention that the note maybe worth between $90 to $150 and if you have bought some in 1988, you would really be in the money in 2010, as I understand some sellers are asking for above $1000.
Do you have any uncirculated pieces for sale?
By the way, The Straits Times also mentioned about the 'rarity' of errors from the Orchid series signed the late Dr Goh Keng Swee, well my previous article depicts a minor error, don't you think so?
Posted by Clement at 7:23 AM No comments: 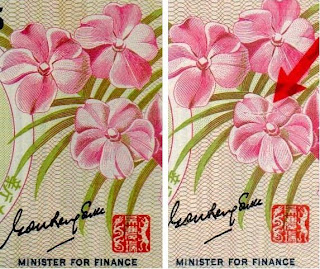 This pair of Orchid $1 series signed by the late Dr Goh Keng Swee has a small printing error or smudge streak on the design of the flower. Compare the usual design against the one with the error to appreciate the difference.
Anybody care to comment on how this error can happen?
Posted by Clement at 6:51 PM No comments:

A pair of  uncirculated Malaya and British Borneo $1 with offset serial numbers.
Posted by Clement at 11:40 PM No comments: 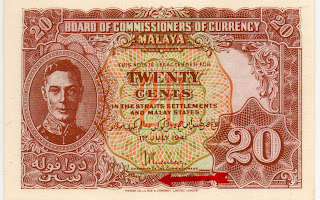 This banknote is one of two pieces that was acquired thru' a foreign dealer in the early 80's. The variety was not discovered until a Malaysian publisher mentioned this particular variety in his 15th edition of his catalog released in May 2000.

I wonder how many of this variety exist?