The Day That Thousands Found Their Money Worthless! ~ Banana Money 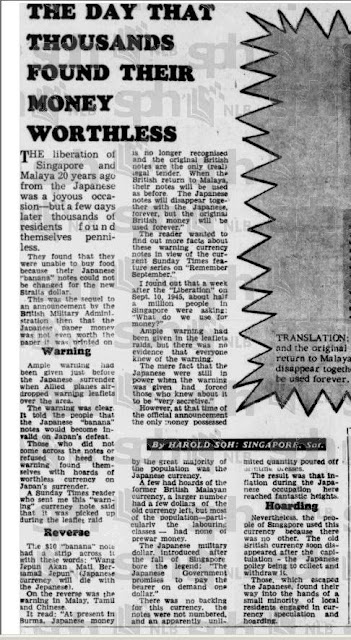 This article appeared in the local newspaper on the 10th October 1965, some twenty odd years after the Japanese Surrender, depicting the anxiety of the peoples' monetary issue. 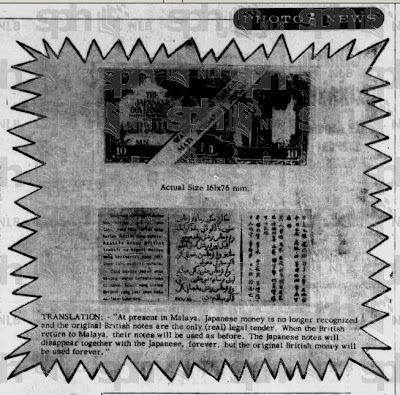 (Extracts from The Straits Times)

(from my personal collection)
Between late 1944 or early 1945 the British Forces began airdropping these propaganda leaflets, using the face of the $10 banana note of the Japanese Invasion money as its design, informing the public of the abrogation of the banana money.

This piece with serial numbers is from the First Series of Banana Note issued by  Yokohama Specie Bank around early 1942 .
Subsequently, around September 1942 the Second Series were issued and they do not have any serial numbers at all.
When first issued these were on par with the then $1Straits Dollar but towards the end of the war $240,000 banana money was the exchange price for $1 Straits Dollar. 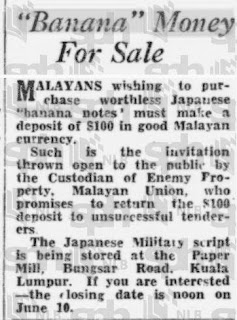 This article was extracted from the Straits Times dated 24th May 1946.

Could anyone enlighten us why the Malayan Union were selling these worthless notes to the public again just nine months after the Japanese Surrender.

I wonder how many banana notes can be bought for $100 Malayan currency?
Do they include the serial numbered ones as well as the propaganda notes?

Well, if you had bought some and hopefully it includes the propaganda notes..............then you may be in the money, so to speak!

In an internet auction of June 2003, a similar $10 propaganda note shown above fetched a price of US$510.00 for a EF grade and at a recent auction 5pcs of the serial numbered $10 banana notes in fine to good fine grades were sold for US$100.00!