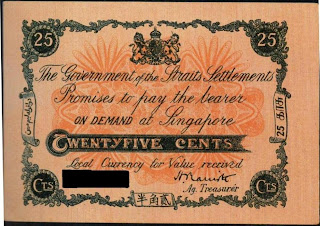 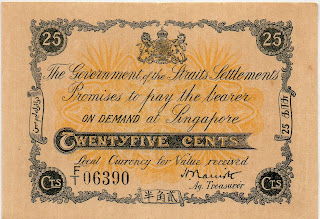 There was a shortage of Silver coins during the First World War Years(1914-18) owning to the Silver becoming intrinsically worth more than their face value. People started to hoard these coins and subsequently melt them down for disposal as bullion.

As a temporary and remedial measure, an ordinance was passed on the 1st October 1917, providing for the issue of low denominational cuurency notes of 5, 10, 25 & 50 cents value.

However, a Government Gazzette of 5th October 1917 announced the intention to issue two values - 10 & 25 cents.

The 25 cents notes were then issued in January 1918 and apparently the decorative background has two different colours, Orange or Yellow. I happened to be in possession of the Yellow variety, anyone care to comment on their varieties?
(Certain extracts from Coins and Coinages, F.Pridmore)
Posted by Clement at 7:54 AM