Shortly after the outbreak of the Second World War there was a currency shortage created by the hoarding of silver coins because the value of silver was higher than the face value of the coins.Legislative action was taken to prohibit such practices, but although this had some slight effect, the shortage still persisted.
The Currency Commissioners then decided to print a new issue of 10-cent notes to defeat the hoarders and intending profiteers, while retaining in circulation a medium of exchange.
In view of the delay which would have ensued if the notes were produced in England, these were then printed locally at the Survey Department Office, Kuala Lumpur.An order was placed for 2,000,000 pieces on 17th July 1940.The 10-cent notes were printed and delivered to the Commissioners by 20th August 1940.The work has been executed in a remarkably short space of time through the services of some 20 European women who were engaged to examine the notes while still in sheet form, for the detection of printing errors and flaws.
(certain excerpt from Coins and Coinages, F. Pridmore)

Have you come across any errors and flaws? Share with us if you do.

The 10-cent notes were then released to the public in September of the same year. (My sincere apologies as I had previously mentioned it was issued 5 years later, this error was spotted by Owen Linzmayer, my thanks to him) 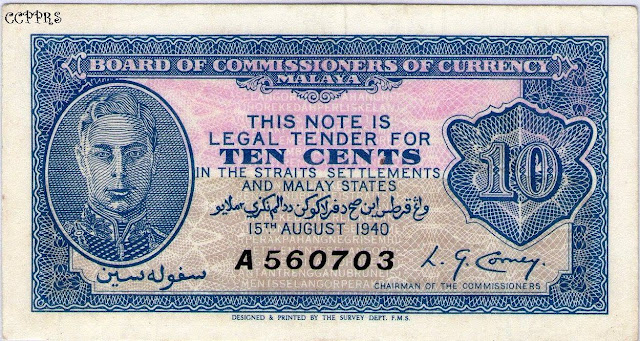 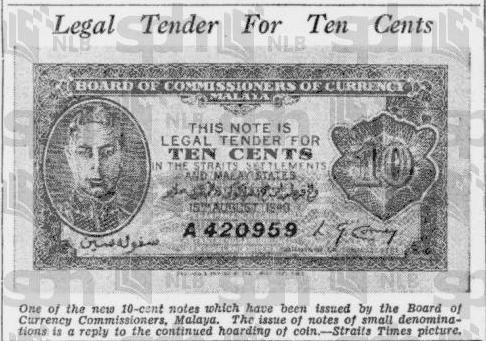 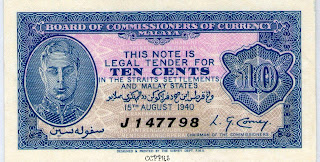 According to a Malaysian cataloger, the prefix letters range from A to M.
Posted by Clement at 11:23 PM